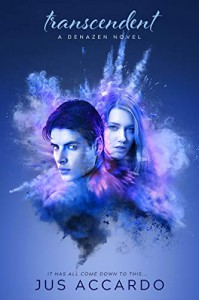 * I received an eARC of this novel via Netgalley. This has not influenced my review.

This is the book I've been waiting over 6 years for and it was oh so very worth it! If I thought the last book in this series was action-packed this one took it to a whole new level. Things were happening one right after the other! There were times where I found myself holding my breath and bracing for the worst. The writing carried this story so well! I went through so many ups and downs. This book made me a blubbering mess and I loved it SO much!

I don't even know what to say about the characters at this point. Dez and Kale are so good together but the world keeps dropping bombs on their precious relationship and their family. Considering they stood the test of time throughout this series I'm pretty sure they have a great future ahead of them.

Brandt stood out to me this time around. I adored the revelations by the almost end of the book. It all made sense! I was so happy and yet sad for the decisions that had to be made that involved Dez and Brandt, Kale and so many more.

Considering the open-ended ending I'd love to see Brandt continue with this series from his perspective. I'd also love to see an end to Denazen. Like, burn it down to the ground and dance on its ashes type of deal. I'd also love for a certain not-a-sister to die a permanent death. Though I have a feeling that if we get another book in this series she's probably going to play a big part as the bad guy because I really don't want to see her "reformed". Her rightful place is in a ditch because of everything she did or helped do to Kale and Dez.

"The bond we had came along once every ten lifetimes."

"The truth didn't always set you free. Sometimes it made you a prisoner, chained to an idea that would never become a reality."