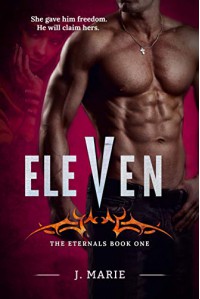 This book brought me back to the beginning of paranormal romance vampire books! This is what I want to see more of in vampire romance books period. I want an interesting overall storyline and a relationship rearing its head in the midst of problems. This is what, I consider, ground zero for what vampire books have become today.

Eleven was an interesting character in a harsh situation from the beginning. He was a mysterious character because no one besides the big bad actually knew much about him. It wasn't his own making and that just made it all the more intriguing. I'm hoping more tidbits from everyone's background will be sprinkled in future books of this series.

Ettie was an okay character. Considering my dislike of kids in novels, I actually thought she was more entertaining as one. As an adult, she made very poor decisions. Even when presented with option A or running and dying she has the gall to think she can run and not die. Did she not live through the nightmare child-her initially described or did I just hallucinate her backstory? Also, does she have a death wish?

The other guys make me think this series is going to be long and prosperous. This overall idea is reminiscent of the J. R. Ward's Black Dagger Brotherhood series but much more toned down, which I really enjoy!