Book Review: On The Prowl By Patricia Brigss 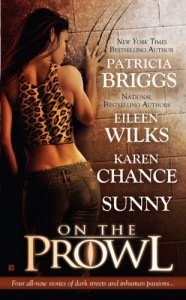 **This is a review of Patricia Briggs's story ONLY**

Even after years have gone by I still find myself drawn back to the Alpha & Omega Series. I have re-read this series a couple of times and I'm still not getting tired of the story or the writing.

I love Anna. She's the beaten down, but not yet broken heroine who finds the strength in herself to fight to stay alive. She's very docile and sweet. She always wants what's best for everyone and when Charles is around, she actually speaks her mind.

I adore Charles and the way he immediately wants to help and protect Anna. Sure he has STRONG feelings on what he'd like to happen between them, but he controls them because he understands she's skittish around other people, let alone dominate werewolves. He's also his pack's assassin, so he has a reputation. Good thing Anna only finds out after they've gotten to know each other at least to the point where she knows he won't hurt her.

"All your wolves are your children, Leo, you know that. They are yours to love and feed, to guard and protect, to guide and to teach."

"'That was a prime example of testosterone poisoning, (...)'"

"He'd have to call his brother, Samuel, and tell him that he'd finally learned that his face wouldn't crack if he smiled."